M42 – Everything and the kitchen sink First off happy holidays! We have only had small windows of clear sky this month in Victoria, but I managed to gather a little bit of data about two weeks ago. I picked Orion as a test for a new light pollution filter for the Victoria RASC, and gathered an hour of ten minute subs with my unmodded 6D. It turned out quite nice, so I found some old data and made a project of it.

I created a synthetic luminance frame and red channel using a blend of the hydrogen alpha and 6D/QSI data through pixelmath. Unfortunately some high moisture/thin cloud left a bit of a noisy halo on the lower right stars in the data from the 6D, but it added so much to the image overall I left it in. I did my best to regulate the noise down there, but it is what it is.

This time, we will be offering a study of star clusters. We will have the big telescope trained on many of the various types of beautiful star clusters visible at this time of year, and offer a study session of each. A great learning opportunity, especially newcomers to astronomy, or to anyone who simply loves the beauty of star clusters!

Finally! We caught a well-deserved break in the weather for the UVic observing session last night. John, Chris, and I were joined by Miles, Reg, Les, Barb, Diane, Lauri, and David for a tour of and dozen interesting open clusters, finishing off with a lovely view of M42. Despite the ridiculously bright (unshielded) lights from Centennial Stadium and some significant mist, the viewing was terrific.

Or, maybe it’s just that we haven’t seen stars for so long it just *seemed* terrific?

Nah. It was great! Thanks for coming out everyone, and thanks to John and Chris for helping host these sessions, and to Reg for his weather prognostications. You nailed it!

We will announce the next session, hopefully in January.

We had a good session at the UVic Observatory last evening observing open clusters across the Milky Way. A list of the clusters and photo of the observers are attached. We also had a look at Pleiades and M42.

It was Sherry’s idea to follow a theme for the evening and that seemed to go down very well with those present. The hosts, Chris, Sherry and I plan to do this again with galaxies being the focus next time.

There’s something nice about a clear night in the middle of a December “wind and rain” parade !! Several members joined John McDonald and Sherry Buttnor for a lovely evening under the 0.8 meter reflector at U-Vic’s Bob Wright Building. We enjoyed our “tour” of several open clusters; many of them were Messiers. The icing on the “cake” was a view of M42 in Orion, with the Trapezium….My favourite was M103, the Christmas Tree cluster – in the constellation of Cassiopeia. Very pretty through the ‘scope. Thanks to John, Sherry and Chris for organizing it; also a good commentary shared on each target!! 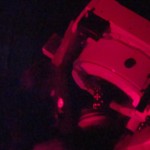 Ready to target another Messier.

About ten of us came up to the Dome to enjoy the show. 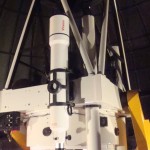 Before the white lights were turned off….a view of the 0.8 Reflector 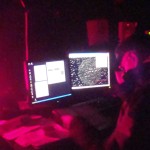 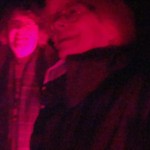 A quick selfie of Diane Bell under the red lights