Neither history nor society is generous to those who come in second place. Buzz Aldrin knows this all too well and I do not believe there is a movie in the works called “The Second Man”. A similar fate has fallen on the Apollo 12 mission. I bet most of you would have to refer to Bruce Lane’s November SkyNews issue to come up with the names of the Apollo 12 crew. I will spare you the effort; Pete Conrad and Alan Bean climbed into the Lunar Module “Intrepid” and landed on an area of the Ocean of Storms on November 19th 1969. Richard Gordon remained aboard Command Module “Yankee Clipper”. The 50th anniversary of the Apollo 11 Moon landing was celebrated with great hoopla around the globe. There were a series of special events at the DAO culminating with Dr. Chris Gainor’s Moon Walk presentation. In contrast the 50th for Apollo 12 barely received a mention.

Apollo 12, however, is memorable for a number of reasons. First of all it was struck by lightning within a minute of launch and the command module immediately lost it’s fuel cells and instrumentation. It was the quick thinking of a brilliant Nasa engineer and Alan Bean’s remarkable memory of an obscure switch which prevented the abortion of the mission.

Apollo 11 was also very nearly aborted during the final descent to the Moon. The relaxed drawl of capsule communicators concealed the alarm that was felt during the last 13 minutes to the Moon. This has been richly captured by an outstanding and immersive BBC podcast https://www.bbc.co.uk/programmes/w13xttx2/episodes/downloads. Apollo 11 came in too fast and overshot the planned landing area. Neil Armstrong was confronted with rough terrain and had to use up all but 20 seconds of fuel to find a suitable landing spot. In contrast the Apollo 12 mission executed a pinpoint landing and Pete Conrad just had to make a minor intervention at the end to avoid some rubble. They landed within 1000 feet of the Surveyor 3 landing probe. The improvement of the landing accuracy has been attributed to adjusting for local variations in gravity introduced by mountains.

There was concealed drama at the end of the Apollo 12 mission. Remember those lightning strikes? There was concern that they may have damaged the explosive bolts that release the parachutes during the November 24th return to Earth. NASA decided it was better not to share these concerns with the astronauts. They had enough to think about! Even though this was the “second” landing it was a fascinating voyage, rich with history and certainly worthy of celebrating and revisiting. The next 50th anniversary will be in April with Apollo 13 … and there was no shortage of drama on that mission!

For the Victoria Centre Monthly Meeting at 7:30 PM on Wednesday, December 11th we will be changing focus from the solar system to the evolution of galaxies. Visiting Astronomer Dr. Marcin Sawicki will deliver an interesting presentation entitled “The lives and deaths of galaxies — more than just a metaphor”. We hope you can make it to Room A104 in the Bob Wright Centre.

In the past the Victoria Centre held its Annual General Meeting in November. Due to a change in our fiscal year end this year the AGM will be held on February 22nd 2020 at the Cedar Hill Golf Course. We will be circulating the banquet menu for you consideration in the near future.

Please note that doors to Astro Cafe will be closed on December 23rd and December 30th. I would like to end by wishing all Victoria RASCals a very Happy Festive Season and Useable Skies in 2020. 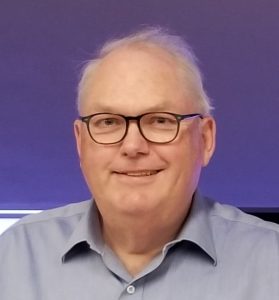 The Hubble Space Telescope was launched 28 years ago in 1990. After overcoming problems caused by a defective main mirror, Hubble has made discoveries that have revolutionized our view of the universe we live in. This talk will cover the history of HST based on a history book the speaker is writing for NASA.

Dr. Chris Gainor is an historian specializing in the history of space flight and aeronautics. He has five published books. He is also President of the Royal Astronomical Society of Canada, and editor of Quest: The History of Spaceflight Quarterly. 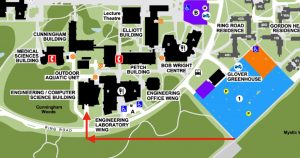 Camosun College is planning to offer an evening section of Astronomy 101 in the fall term at the Interurban Campus and is seeking an instructor. Please see webservices.camosun.bc.ca/employment/ for a link to this employment opportunity including the qualifications needed. The application deadline is August 15, 2018.

Gravitational lensing, the “bending” of light in a gravitational field is one of the many awe inspiring phenomena predicted by Einstein’s theory of General Relativity, and which have since been unambiguously borne out by observations. Since the first confirmation of a gravitational lens in 1979 -nearly 45 years after it was hypothesized- the catalog of confirmed lenses now runs to a few hundreds. Aided by the rapid advances in telescope and instrumentation technologies, the magnification boost provided by gravitational lensing – Nature’s telescope – is now being harnessed to probe astrophysical processes in extremely distant, faint objects even in the very early universe with a level of detail that would otherwise be exceedingly challenging. My presentation aims to explain the principles of gravitational lensing using basic physics, trace its development as a powerful observational tool, and present two applications and related results drawn from my own research.

Bio: Karun Thanjavur: As an observational cosmologist, discovering new gravitational lenses and developing innovative techniques to harness them as observational tools are amongst my diverse research interests. As part of my doctoral thesis at UVic in 2009, I developed an automated technique to search for lenses in wide field, pan-chromatic imaging. These explorations of the distant universe come after a full career as a mechanical engineer, specializing in control systems and robotics. Born and raised in a small town in South India, I completed my education up to a bachelor’s degree in mechanical engineering there, before moving to Canada to pursue graduate studies first in Robotics, and later in Astrophysics. After my PhD from UVic, I worked as a Resident Astronomer at CFHT in Hawaii for three years, before returning to UVic to accept a position as a senior lab instructor in astronomy. Even though undergraduate teaching is the focus of my current position, I continue to pursue various research projects. I also enjoy sharing the excitement of science and my research efforts with the public through several outreach initiatives through the UVic observatory.

Supernovae are among the most energetic, extreme and interesting objects in the Universe. This talk will focus on the nature of supernovae, their cause and properties, and especially on how supernovae affect our very existence.

Bio: Chris Pritchet is an Emeritus Professor in the Department of Physics and Astronomy at the University of Victoria, where he has been a faculty member since 1982. He studies supernova explosions across vast reaches of the Universe, and was the Coordinator of the “Supernova Legacy Survey” – an observational quest for the nature of the mysterious “dark energy” that fills the Universe. Outside astronomy, his passions are music, canoeing, back-country skiing, and film.

This talk will focus on how various cultures around the world were influenced by the sudden appearance of Supernovae. Further discussion includes where supernovae were seen, how bright they were and how they were identified by modern scientists (archaeologists, geologists, paleo-astronomers and astrophysicists).  The final segment goes briefly into the astrophysics of the two main Supernovae types tying in how we know the distances and what the Supernovae may have looked like to these cultures even though historical records are very scant at best.
There will also be a short presentation on the outreach program at the Dominion Radio Astrophysical Observatory, (DRAO) which is located near Penticton.

Wendell Shuster has been a member of RASC for 37 years, first in Vancouver and since 2000 in Penticton. He is currently the Tour Guide at the DRAO. He has served on executive positions of the Okanagan Centre of RASC as well as it’s predecessor the Okanagan Astronomical Society. Wendell has made numerous astronomical presentations on a wide variety of topics. His devotion to the science is truly astronomical. Who else do you know that has the entire collection of 1872 glass plates from the Palomar Sky Survey in his basement? Don’t miss this one!

Remember the pizza party I mentioned? Probably not…it was a year ago or more. Well, it’s on! As a thank you for all the long hours and hard work you’ve put in at various events, we’re inviting all Victoria Centre members (and your spouses) to a party.

If you are a RASC-Victoria Centre member, and have volunteered at one or more RASC events in the last couple of years, you’re invited!
-Saturday December 3rd.
-6pm-10pm
-Garry Oak room, Fairfield Community Centre,1341 Thurlow Road, Victoria.
This will be a pizza party, our regular monthly meeting for December, and a Members Night combined. We’d like at least two or three members to come and show off their skills: astrophotography, research projects, telescope making, crafts….anything astronomy-related that you’d like to share with the group.
Please email me directly if you plan to attend (and if you’re bringing your spouse), and if you’d like to present something as part of Members Night. Also let me know if you have any food allergies and/or special requests for pizza.

*Please note: there will be NO regular monthly meeting at UVic in December.  The Pizza Party/Member’s Night will be in its place.  We will hold a short business segment as usual as required by our bylaws (around 7:30pm), but this meeting will be primarily a Thank-You get-together for our amazing volunteers.

Encore! Encore! The RASC Victoria Centre, in partnership with Friends of the Dominion Astrophysical Observatory, the National Research Council of Canada, and Science Literacy Week, present one final Saturday evening Star Party at the DAO, on Saturday September 24th. All the same great activities you enjoyed at the observatory all summer are on the schedule for the evening, with Dr Geoff Steeves of the Planetary Society as our special guest speaker.
Tickets are required. Tickets are free, and will become available starting at 1pm, Friday September 16th at our EventBrite site.  Click here. See you there!

Help get Light Pollution Abatement on the Federal Government’s Radar

The words Light Pollution and Outdoor Lighting occur nowhere in the current draft of this document. Here is an opportunity for each of us to help get light pollution’s impact on our planet onto the government’s radar! The more individual submissions addressing the destructive effects of lighting up the nocturnal environment, the greater the chance that the message will be heard and heeded. (There will be submission from RASC as well.)

Choose your ‘pet peeve’ (other than in ruining the night sky) about LP – e.g., its impact on ecosystems and the environment, health (all species), quality of life, biodiversity, greenhouse gases, sustainable natural resources, climate change, Indigenous Peoples, etc. (all key words in the Fed’s Development Strategy plan), go to the website, and contribute a few minutes to the planning of a sustainable future for Canada. More information and an explanation of the detrimental impact of bad outdoor lighting are at https://victoria.rasc.ca/night-lighting/ and http://www.rasc.ca/outdoor-lighting.

Members of the RASC Victoria Centre are selling raffle tickets. Tickets are 3 for $10 or 1 for $5. The prize is a Meade ETS-LX 8″ telescope on a LightSwitch goto mount with some accessories. The draw will be made at the June meeting.