On Wednesday, January 31st, weather willing, we will be able to view a total eclipse of the Moon. The Moon will move into full eclipse in the early hours of the morning and will be in partial phase in the western sky as the Sun rises. The Total Lunar Eclipse will develop over the course of about 3 hours. It’s a perfect opportunity to capture some snapshots of the event. Read further to find out what happens during the eclipse and how to capture it photographically.

Above Eclipse times are for Pacific Standard Time (PST) for the west coast of North America, and are calculated from UT as presented in the Observers Handbook 2018, pages 126-27.

What do you need?

Everything from your eyes, binoculars and telescope are suitable. Bear in mind this is a long process and at this time of year dress warmly and bring a chair if you want to be comfortable.

Find yourself a location that has a clear horizon view of the west especially if you wish to view during the late stages.

Keep a log of what you see and note the time. Pay attention to how much of the light on the moon is obscured and if there are any colouration changes. During the total eclipse the Moon will take on a deep orange-red colour. The colour of the Moon is a function of contaminants in the atmosphere and varies from year to year.

Equipment
Any camera with the capability of setting shutter speeds and aperture settings manually will do fine. The ability to use interchangeable lenses will be an advantage for more detailed images of the Moon. For the darker parts of the eclipse, eg. totality you should use a tripod support for best results. If you have access to a telescope you can try capturing the event using prime focus techniques through the telescope optics.

Settings
Today’s digital cameras are very sensitive to light reflected by the Moon. Use ISO 400 to ISO 800 and a long telephoto lens or zoom setting. Smartphones and point-and-shoot digital cameras will not produce rewarding photos of the eclipsed Moon, but can be useful for taking panoramic shots of your surroundings which include the eclipsed Moon.

Technique
The simplest eclipse pictures can be taken with manual settings on your camera and a normal lens, preferably supported by a tripod. For best results use a cable release to minimize vibration. Images taken in this fashion result in a small lunar image. This is why it is preferable to use a telephoto lens to photograph the Moon. For a 35mm camera try a 200mm lens or something close to this, even better a 500mm lens or higher. You may also use teleconvertors to increase magnification, these typically come in 1.4x and 2x strengths. Their downside is they reduce the effective aperture of your optical system. A 1.4x teleconvertor will decrease your effective exposure by 1 stop, a 2x teleconvertor will decrease your effective exposure by 2 stops. Work out your effective aperture of your optical system ahead of time so you don’t have to think about it on the night of the eclipse.

To achieve any higher magnification than what is stated above you will have to use a telescope at prime focus. For this your manual camera does need to have the capability of using interchangeable lenses. For prime focus you will use the telescope optics as your interchangeable lens. To attach your camera to your telescope you will need two things a T-adapter that fits your camera and a telescope camera adapter that fits your telescope. The telescope camera adapter is designed to fit in the focusing tube of your telescope and is threaded to accept the T-adapter of your camera. With the magnification involved with telescopic optics it is likely that you will need to use a tracking mount. Preferably the mount should be able to track at lunar speed as opposed to sidereal but if the shutter speeds chosen are shorter than 1 or 2 minutes this is not critical.

Exposure times are the next consideration. The following exposure times are based on a medium speed film and an effective aperture that would be common with a long telephoto and teleconverter combination. Exposures may vary with your equipment based on ISO speed of film used and effective aperture. The Danjon Lunar Eclipse Luminosity Scale has been included to provide better guesstimates for totality.

Note 1. 1st and 4th contact times given for the partial phases are biased for the light part of the Moon. Remember you are dealing with vastly different exposures between the light and dark parts of the Moon during eclipse. The bias of about 1 stop minus avoids overexposure of the dominant bright area of the Moon.

Note 2. 2nd and 3rd contact times given for the partial phases are biased for the dark part of the Moon. The bias of about 1 stop plus is a good strategy for negative film not quite so good for slides and digital capture given they don’t tolerate overexposure well.

The exposure times are only recommendations. Remember the cardinal rule about photography … bracket. Always try exposures plus and minus your chosen exposure. This gives you a better chance at getting usable results. Let’s all hope for clear weather. If you have any questions please send email to David Lee at davidflee7331@gmail.com.

RASC Victoria members used the Bob Wright Centre at the University of Victoria for a nation-wide celebration of RASC astronomy in Canada for the last 150 years, from 3-5pm on Saturday, January 27th. We will were joined by astronomy teachers and students from University of Victoria, Camosun College, and Victoria High School. Tours of the 32″ telescope and observing the Sun through solar telescopes was happening outside. Members participated in a series of Youtube “webisodes” from RASC Centres across Canada. 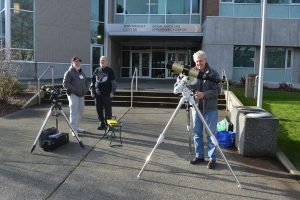 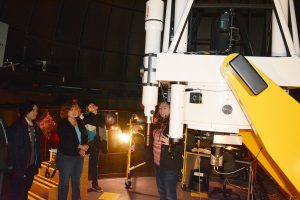 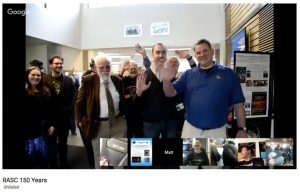 As a follow-up to last January’s report, it is time to report back about my progress with my astronomy resolutions of 2017. One of my goals was to learn more and I did achieve that. One area I know little about is astrophotography. To learn more, I purchased a CCD camera in March and have been learning to use it. Primarily, I have done this in daylight hours so I could see what I was doing. I have tried photographing distant objects, typically trees, so I can work on achieving focus. I chose a monochrome camera so I also bought a set of filters and a filter wheel so I have been figuring out how to include those in what I have been doing. As there are a number of parts to all this, i.e., camera, filter wheel, software, etc. there is a lot to learn. I have taken small steps so far but I am getting much more proficient at the tasks I have practised.

Another goal was to spend more time observing. I did spend more time looking through a telescope in 2017 which was good and I’m getting much better at finding objects. One thing to work on this year is getting out on more evenings when the sky is clear. It is still too easy to turn on the television or sit in front of the computer. So this year, my goals are to keep learning and do even more observing.

2018 is looking to be another active year for the Victoria Centre. As introduced in my December report, the first event of 2018 will be the launch of the RASC sesquicentennial on Saturday, January 27. We will be looking for helpers for this event in the coming weeks and I hope that many of you can attend.

We are planning to hold Astronomy Day in April again this year as well as Summer Star Parties at the DAO. These are great opportunities to get involved and more information will be provided as plans are made. Make sure you visit our website to keep up to date about the activities of our Centre.

Quasars are the brightest objects in our Universe.  A quasar is a rotating disk as big as our solar system and hotter than the Sun, formed when matter spirals into a supermassive black hole at the centre of a galaxy.  I will discuss these fascinating objects and how they tap the strong gravity of black holes.

Bio: Patrick Hall is an astronomer and Professor at York University. Born in California to Canadian parents, he was an undergraduate at U. C. Berkeley, a graduate student at U. Arizona, and a postdoc at U. Toronto, Princeton, and the Universidad Catolica de Chile. He divides his work time between research on quasars (and any object with a sufficiently odd spectrum), teaching astrophysics, and outreach. You can follow him on Twitter at @patrickbhall

The Lunar X is a claire-obscure effect in which light and shadow creates the appearance of a letter “X” on the rim of the Blanchinus, La Caille and Purbach craters. The X is visible only for a few hours before the first quarter slightly below the lunar terminator. Near the X, the lunar V is also visible, formed by Ukert crater and several other small craters.

If you never had the chance to view the Lunar X, also known as the Werner X, there are several time this year that feature could be visible from Victoria. The time predict the beginning of the event and all in LOCAL TIME.